There Can Be Only One!

What a weekend, huh? The Giants just wrapped up their final series of the regular season with the Dodgers and left it winners of 2 out of 3 and winners of the season series 10-9. Oh yeah, and also as sole owners of first place in the NL West by one game. Could anyone have scripted a Dodgers/Giants rivalry season any better? The Dodgers, with their super team that got even more super at the deadline with the additions of Max Scherzer and Trea Turner, versus the Giants, who's old dudes are having a renaissance and helping carry a surprisingly deep team that has few holes? If you watch Ted Lasso, the Dodgers are the sexy team with swagger, a team of Jaime Tartt's, to the Giants' team full of Sam Obisanya's, the humble unassuming steady dudes that get the job done. Sure, the Giants added Kris Bryant at the deadline, acting like the Dodgers in getting a big name, but overall the Giants are made up of old grizzled vets everyone had written off and no name up and comers who are now key pieces. I keep comparing this team to the Cleveland Indians roster in the movie "Major League", and honestly I don't think it's that far off. Despite all of their differences, these are two teams that are extremely equal. All 19 games between these two teams have been insane. The fact that the season record is 10-9 in favor of the Giants and the number of runs scored favors the Dodgers by just 2 (and would have been equal if not for Albert Pujols's 2 run homer in the 9th inning of last night's game) tells you all you need to know. These teams play close games every single time which makes sense since they are incredibly close in the standings.

Now, they have Barry Bonds numbered games left to decide how this all shakes out.

25. They have 25 games left if you didn't get it. Despite having the two best records in baseball, one of these teams is destined for a one game playoff. Both the Dodgers and Giants want to avoid that game as much as possible. First of all, there's no telling what happens in any given game. One stupid baserunning mistake here, one bad ump call there, and your amazing season can come to a screeching halt. No one on either of these teams or their fanbases wants that. Considering both these teams likely will win 100 games, it's criminal one of them will be forced to play a one game play-in game essentially. Right now, whomever loses the division is ticketed to be the first wildcard. It would take a monster collapse for one of these teams NOT to be the first wildcard. However, that puts all the pressure on them. The 2nd wildcard is going to come from a pool of teams with their own strengths and weaknesses and while none of them on paper would be better than the Dodgers or Giants and none would likely actually win a normal 5 game Division Series against either of them, they all have the capacity to knock one of these teams out in a one game playoff. Would either of the Giants or Dodgers want to face Fernando Tatis Jr for 4 at-bats in a must-win game? Would they want to face Zack Wheeler and Bryce Harper? Would they want to face Luis Castillo and Nick Castellanos? The Cardinals have Giants killers Nolan Arenado and Paul Goldschmidt but the Cards have also been Dodgers killers in the postseason, would either team want to face St. Louis? What if the Braves fallout of the division, would either team want to play Atlanta in a one game playoff? It's not that the Giants or Dodgers would be scared of any of these teams, but all of them could beat either team in a random one off game. It's too much to risk, which is why the division title is so important to both teams.
On one hand, if you're a Giants fan, you have to be thrilled the team is even in this position. Not only competing for a division title in September, let alone leading it, but competing for a playoff spot at all. No one picked the Giants to make the playoffs in 2021. Not even most Giants fans. I picked the Giants to come in 3rd place behind LA and SD in my preseason predictions on this very site. Most baseball people picked the Giants to come in 3rd or 4th. Projections had them around .500 but even the best expectations for the Giants were them maybe being in the wildcard hunt in September, but with no chance of actually winning  a wildcard spot. On the other hand though, this team has had an improbable run, and they've led baseball for most of the season. Anything less than an NLDS appearance (at least) would feel oh so very 1993, when the team won 103 games and MISSED the playoffs on the last day of the season. That is how playing in the wildcard game (and losing) would feel. No Giants fan wants a repeat of that.
For the Dodgers, they have to be baffled the team up north continues to not only lead them in the standings, but beat them in the most incredible ways. It makes no sense when looking at each respective roster. Yet here we are, 25 games left to go, the Dodgers and Giants fighting tooth and nail to win a division and avoid a one game playoff. The competition couldn't be more balanced as well. Now that their regular season battles are over, the division will be decided by the remaining schedules which look like this:
Dodgers opponents combined winning percentage: .479
Dodgers home games left 12 (13 away games)

All this is to say, once again these teams will be evenly matched, even with who they have to go face. Would it shock anyone to see both of these teams tied to end the regular season? Talk about drama, imagine a Major League Baseball finale that puts the Giants and Dodgers in a one game playoff against each other to determine who wins the West and who wins the wildcard, with the loser having to immediately go play the wildcard game the following day. If you're the Dodgers, that means burning up Scherzer and Buehler if you lose. If you're the Giants, it means burning up Gausman and Webb. Either outcome is nuts. Despite who wins the division, it just feels like these teams are destined to meet again in the playoffs for the first. time. ever!! That's right, how have the Giants never faced the Dodgers in the playoffs before? Who knows, but they haven't met in a playoff format and this year it seems inevitable.

That's September baseball. 25 games left to decide the victor and that's only the beginning of the playoffs. It's going to be an insane ride. As always... 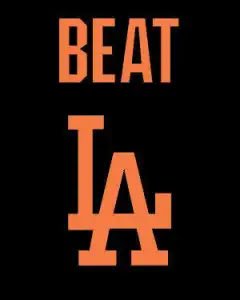 Popular posts from this blog

The Giants Didn't Make the World Series, but Neither Did the Dodgers

October 26, 2021
I've been waiting to post this entry to see how the NLCS finished. It was either going to be a very depressing "the Dodgers knocked the Giants out of the NLDS and now they're going to the World Series and are probably going to win it" post or a less depressing "the Giants didn't beat the Dodgers but at least the Dodgers didn't win the pennant" which, I admit, I didn't ever think I'd actually write. I fully expected to write an entry where I was going to be begging the AL pennant winner to please just stop a Dodgers legitimate World Series victory for the first time since 1988. After the Dodgers broke our collective hearts, a Dodgers/Astros World Series rematch felt inevitable. In fact, no matter who won the AL pennant, the Red Sox or Astros, it just felt destined the Dodgers would make it there and have their revenge on one of those two teams that won a championship against them and give LA their first non-asterisked World Series in 33 years
Post a Comment
Read more

We Have A Giants and Dodgers NLDS

October 07, 2021
It was fated. We all knew this was going to come to pass. The Giants won a franchise record 107 games. The Dodgers tied a franchise record with 106. The Giants won the NL West on the final day of the season by one game. The Dodgers were sent to the wildcard in a Squid Game elimination round against the Cardinals. They survived, so now we have the first ever San Francisco Giants and Los Angeles Dodgers National League Division Series and true playoff. That is absurd, given the history of these franchises. How many times have the Yankees and Red Sox matched up in the AL playoffs? A pretty decent amount. Yet these two franchises have not met in a "true" postseason ever. They played 3 game series to determine the winner of the pennant in 1951 and 1962 but history views those as extended regular season tiebreaker games. This time, we get a 5-game series and the winner advances to the National League Championship Series.  Even though it's just the first round, the stakes could
Post a Comment
Read more