We Have A Giants and Dodgers NLDS

It was fated. We all knew this was going to come to pass. The Giants won a franchise record 107 games. The Dodgers tied a franchise record with 106. The Giants won the NL West on the final day of the season by one game. The Dodgers were sent to the wildcard in a Squid Game elimination round against the Cardinals. They survived, so now we have the first ever San Francisco Giants and Los Angeles Dodgers National League Division Series and true playoff. That is absurd, given the history of these franchises. How many times have the Yankees and Red Sox matched up in the AL playoffs? A pretty decent amount. Yet these two franchises have not met in a "true" postseason ever. They played 3 game series to determine the winner of the pennant in 1951 and 1962 but history views those as extended regular season tiebreaker games. This time, we get a 5-game series and the winner advances to the National League Championship Series.

Even though it's just the first round, the stakes couldn't be higher. Bragging rights of the tallest order.  You have the machine that is the Dodgers going against the scrappy Giants, who is all but assured to be the underdog despite having the best record in baseball. Giants don't care. No other team seems to have the backbone to beat LA. The Padres sure couldn't. The Brewers rolled over and played dead in the final series of the year, a potential NLCS opponent for these two teams. The Giants will not be intimidated by all the hardware LA brings into the series, from numerous former MVPs and Cy Young's and All Stars. The Giants will counter with one of their deepest teams 1 through 26 in history. Any member of the roster can forge a hero's story this coming week just as they have all season long.

Everything the Giants do, the Dodgers mirror and vice versa. Captain Brandon Belt breaks his thumb? The Dodgers oblige, with Max Muncy messing up his elbow. Giants lose a key bullpen guy to a shoulder strain? The Dodgers lose Kershaw to a forearm strain. Other than that, these teams are healthy and ready to rumble, first at Oracle Park and then in Dodgers Stadium. If anyone believes this series isn't going the full five games, they haven't been following these two teams battles all season.

The Dodgers have that 2010 Phillies aura. The Phillies came in arrogant, with Halladay, Oswalt, and Hamels and a big time offense. The 2010 Misfit Giants dispatched them in six games. The Dodgers come in with Buehler, Urias, and Scherzer and a high octane offense as well. The Giants will counter with their "baby ace" Logan Webb and a rediscovered ace in Kevin Gausman, who went missing most of the 2nd half, but has returned just in time for the showdown, along with steady number 3 Anthony DeSclafani. Both offenses hit homers like nobody's business, with the Giants finishing 1st in that category and the Dodgers 3rd. The Dodgers had the best pitching by ERA in baseball, the Giants were 2nd.

All this adds up to what should be an epic, unbelievable first meeting of these two ancient enemies. It would be a whole lot of fun if it wasn't so darn nerve-racking. One of these fanbases is going to be absolutely gutted, while one celebrates in elation. It's not hyperbole to consider this series the actual World Series, much like the 90's titan matchups between the Cowboys and 49ers usually felt more like the Super Bowl than the Super Bowl itself. The victor still would have to win one more round before even getting to the Fall Classic but MLB and its fans will be hard pressed to find a more colossal matchup.

This blogger is going to be on pins and needles all week and may not make it through the week but it's going to be a memory maker, good or bad, for the next several decades for Giants and Dodgers fans alike. That's what it's all about. Please SF Giants, for just 3 more times this year, and perhaps in the biggest event between these two franchises in the history of the sport, BEAT LA! 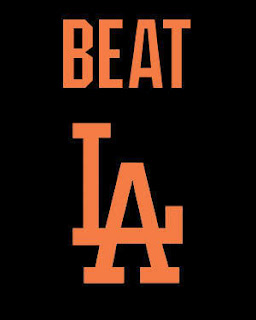 Popular posts from this blog

The Giants Didn't Make the World Series, but Neither Did the Dodgers

October 26, 2021
I've been waiting to post this entry to see how the NLCS finished. It was either going to be a very depressing "the Dodgers knocked the Giants out of the NLDS and now they're going to the World Series and are probably going to win it" post or a less depressing "the Giants didn't beat the Dodgers but at least the Dodgers didn't win the pennant" which, I admit, I didn't ever think I'd actually write. I fully expected to write an entry where I was going to be begging the AL pennant winner to please just stop a Dodgers legitimate World Series victory for the first time since 1988. After the Dodgers broke our collective hearts, a Dodgers/Astros World Series rematch felt inevitable. In fact, no matter who won the AL pennant, the Red Sox or Astros, it just felt destined the Dodgers would make it there and have their revenge on one of those two teams that won a championship against them and give LA their first non-asterisked World Series in 33 years
Post a Comment
Read more

There Can Be Only One!

September 06, 2021
What a weekend, huh? The Giants just wrapped up their final series of the regular season with the Dodgers and left it winners of 2 out of 3 and winners of the season series 10-9. Oh yeah, and also as sole owners of first place in the NL West by one game. Could anyone have scripted a Dodgers/Giants rivalry season any better? The Dodgers, with their super team that got even more super at the deadline with the additions of Max Scherzer and Trea Turner, versus the Giants, who's old dudes are having a renaissance and helping carry a surprisingly deep team that has few holes? If you watch Ted Lasso, the Dodgers are the sexy team with swagger, a team of Jaime Tartt's, to the Giants' team full of Sam Obisanya's, the humble unassuming steady dudes that get the job done. Sure, the Giants added Kris Bryant at the deadline, acting like the Dodgers in getting a big name, but overall the Giants are made up of old grizzled vets everyone had written off and no name up and comers who ar
Post a Comment
Read more